THE ISLAMIC (WAHHABI) BELIEF: Allah is the Only Truth

THE NAQSHBANDI BELIEF: Aba Yazid al-Bistami is the Truth

On page 15 of the book The Naqshbandi Way it reads –

“Whoever recites this Ayah even a single time will attain a high rank and a great position, he will get what the Prophets and saints could not get, and will arrive at the stage of Aba Yazid al-Bistami, the Imam of the order who
said: “I am the Truth (al-Haqq).”

WAHHABI BELIEF:The above statement I am the Truth – is a clear example of Shirk (association) in the aspect of the Names and Attributes of Allah, since Al-Haqq in the definite form, is one of Allah’s unique attributes and is not shared by any created being or thing unless preceded by the prefix `Abd meaning “Slave of” or “Servant of”. (In fact the Mystical- Hallaaj was publicly executed as an apostate for daring to openly claim divinity in his infamous pronouncement “Anal-Haqq”- I am the Truth.)

Refutation of the above accusation:

From the above foolish statements of Wahhabis, it is clear that, they are just one sect among 72 misguided sects, who did not get the correct understanding and wisdom of Quran.

This verse explaining takes hours, but to minimize the length of writing, the Witness of Allah and those who endued with knowledge is that there is no God but Allah. So when an ordinary believer says: “There is no God but Allah” is different from the meaning and understanding and submission of the “Angles and Ulool ilm”

You cannot say, every believer’s witness is the same!. It is clearly known belief that “Angels do not have their own Will Power”, so when a person understand the above verse in Aal imran (18), he must understand that, Angels are in Fana Fillah, in their maqam.

The Prophets are Infallible (masoom) because they attained such rank and wisdom that rule over them. Some saints who have attained such levels may have uttered words of selflessness in complete annihilation in the “Tawheed of Allah” as it is related in Sura 3 verse 18.
I do not know how to explain it in words, it is impossible to explain in words.

But Almighty God has put in example in the relationship between Man and Woman in their co-habitation. So that they may think about their attraction to their opposite sex ans how it undertake their physical relationship and how the two souls become one.

So when you google to find your “soul mate” , try to understand, what divine wisdom is behind this human marriage between man and woman.

So as mentioned in Aal Imran (3:18), to Witness the Faith as “Allah Witnessed” “There is no god but He: That is the witness of Allah, His angels, and those endued with knowledge,

This is why Prophet alaihiswalathu wa salam says: “Beware, the vision of a true believer, for he sees with the Light of Allah”

You are saying, the rank of attaining “The Truth” is Shirk!

How do you then believe the above Hadith: “Believer sees with the Light of Allah (Noor Allah)

A Saint who reach in the Truth (Al Haqq) and nothing remains him except “Truth” and he then says “I am the truth” is not shirk,because it is not him it says, rather it is the God’s Inspiration through his tongue!

Since “As-Salam” is Allah’s Name, according to Wahhabi logic, how can someone say to another “Assalam alaikum”, Assalam up on you”? wHile Wahhabi believe Allah in heavens?

IN QURAN ALLAH USING HIS NAMES OF ATTRIBUTES WITH THE CREATIONS:

Allah bring them into Noor (Ila Noor), since there is no 99 persons for One Allah, why don’t you understand, when they Enter in “Noor”-Ila Noor , they also enter in “Al Haqq” other divine attributes, according to their rank and according to What Allah reveal to them about HIM?

Or you wicked sect believe that One Allah in 99 persons like Christians believe One Allah in three persons? ehhh

Or are you going to deny that, Al-Noor is not Allah’s Name? or “Ila Noor” to Light is different to “Al Noor”. If you believe so, then your false tawheed is already in vain!. Because now you will have to admit that Quran is using Allah’s name in regard to the creations!

I suggest you that you better acknowledge that you understood nothing from Islam (Quran and sunnah) and go to a Shaykh of Tarbiyyath from a well known Sufi tariqah, leave your ego behind (the ego that depended on eyes and ears to learn with corrupt intellect) which corrupted your faith, and submit to a Shaykh and learn tawheed and deen from him.

Quran 78:39 That Day will be the sure Truth: (Zaalikal Yaumul Haqq)

In Quran a day is related with the word “Al Haqq”! , and Wahhabis say with their misunderstanding only “Allah is Haqq”

Quran 39: 5 Mohsin Khan: He has created the heavens and the earth with truth. He makes the night to go in the day and makes the day to go in the night. And He has subjected the sun and the moon. Each running (on a fixed course) for an appointed term. Verily, He is the All-Mighty, the Oft-Forgiving.

So the World “Al haqq” is only used for Only Allah’s Definite Essence (Dhaath)?

So one must have spiritual wisdom to understand this difference. Allah Almighty is not playing with some language and literature in Quran. Quran is furqan, you can’t even distinguish between truth and false hood , and you claim you know Quran!???

The Spiritual State of the One Who Reached in the Perfection of Faith:

On the authority of Abu Hurayrah (may Allah be pleased with him) who said:

The Messenger of Allah (peace and blessings of Allah be upon him) said, “Verily Allah ta’ala has said: ‘Whosoever shows enmity to a wali (friend) of Mine, then I have declared war against him. And My servant does not draw near to Me with anything more loved to Me than the religious duties I have obligated upon him. And My servant continues to draw near to me with nafil (supererogatory) deeds until I Love him. When I Love him, I am his hearing with which he hears, and his sight with which he sees, and his hand with which he strikes, and his foot with which he walks. Were he to ask [something] of Me, I would surely give it to him; and were he to seek refuge with Me, I would surely grant him refuge.’ ” [Al-Bukhari], Imam Nawawi in 40 Hadith.
So, again the Hadith: “Beware the vision of a true believer for he sees with the Noor of Allah” in context to the above Hadith, such believer may see what others cannot, may hear what others cannot hear!
Quran Proves 4:69 All who obey Allah and the messenger are in the company of those on whom is the Grace of Allah,- of the prophets (who teach), the sincere (lovers of Truth), the witnesses (who testify), and the Righteous (who do good): Ah! what a beautiful fellowship!
Many Ahadith Proves, Prophet Muhammad alaihiswalathu wa salam lead prayers for all Prophets during the night of Journey, Musa alaissalam and Adam (A,S) argued in the heavens (Bukhari), Prophet (s.a.w) meeting all Prophets in the heavens during the “miraj” night of ascension.
Narrated Malik bin Sasaa: That the Prophet talked to them about the night of his Ascension to the Heavens. He said, “(Then Gabriel took me) and ascended up till he reached the second heaven where he asked for the gate to be opened, but it was asked, ‘Who is it?’ Gabriel replied, ‘I am Gabriel.’ It was asked, ‘Who is accompanying you?’ He replied, ‘Muhammad.’ It was asked, ‘Has he been called?’ He said, ‘Yes.’ When we reached over the second heaven, I saw Yahya (i.e. John) and Jesus who were cousins. Gabriel said, ‘These are John (Yahya) and Jesus, so greet them.’ I greeted them and they returned the greeting saying, ‘Welcome, O Pious Brother and Pious Prophet!;’ ”  (Sahih Byukhari Book #55, Hadith #640)
Before Judgement day, all Prophets in heavens?, Wahhabis think about it and wake up to yourself!

WHAT DOES THE SHAYKH OF WAHHABIS SAY?:

Following is a quotation from Muhammad Man ar Nu‘mani’s book (p. 85), Ad-Dia’at al-Mukaththafa Didd ash-Shaikh Muhammad ibn Abdul Wahhab: “Shaikh Abdullah, the son of shaikh Muhammad ibn Abdul Wahhab, said aboutTasawwuf: “My father and I don’t deny or criticize the Science of Sufism, but on the contrary we support it because it cleans the external and the internal of the hidden sins which are related to the heart and the outward form. Even though the individual might externally be on the right way, internally he might be on the wrong way; and for its correction tasawwuf is necessary.”

In the fifth volume of the collection of letters by Muhammad ibn Abdul Wahhab entitled ar-Rasa’il ash-Shakhsiyya, page 11, and again on pages 12, 61, and 64, he states: “I never accused of unbelief Ibn Arabi or Ibn al-Farid for their Sufi interpretations.”

WHAT DOES IBN TAYMIYYA SAYS:

Imam Ibn Taymiyya mentions in the volume Majmu Fatwa Ibn Taymiyya , page 190: “A servant of Allah, Almighty and Exalted, cannot be considered a saint unless he is a true believer. Allah mentions in Qur’an, Surat Yunus, 62-63: “Now surely, on the friends of Allah there is no fear, nor shall they grieve; those who believe and guard against evil.”

He then quotes the famous hadith from Bukhari: “My servant draws not near to Me with anything more loved by Me than the religious duties I have enjoined upon him, and My servant continues to draw near to Me with supererogatory works so that I shall love him. When I love him I am his hearing with which he hears, his seeing with which he sees, his hand with which he strikes and his foot with which he walks. Were he to ask [something] of Me, I would surely give it to him, and were he to ask Me for refuge, I would surely grant him it. I do not hesitate about anything as much as I hesitate about [seizing] the soul of My faithful servant: he hates death and I hate hurting him.”

He explains the phrase, “Whoever comes against one of My saints is challenging Me to fight” thus: “It means that Allah is expressing: ‘I will seek revenge against anyone who comes against My saints like an aggressive lion.’” (p. 314)

He said (volume 11, page 313): “Allah Almighty will unveil to his saints states that have never been unveiled before and He will give them support without measure. If that saint begins to speak from the things of the unseen, past or present or future, it is considered from the viewpoint of Bab al-cilm al-khariq, miraculous knowledge. Anything that a saint does which is from the unseen, for people or for listeners, of healing or teaching knowledge, it is accepted and we must thank Allah for it.”

“Those great Sufis were the leaders of humanity, and they were calling to what is right and forbidding what is wrong.”

But he was the inheritor of divine “truth, guidance and light”. The Jews attacked him,because they did not understand his maqam and spiritual states. Just as the Wahhabis today attack the Saints of God!

Or if someone among you sees with the Light of Allah, then bring him I would be happy to talk to him. Or else it is better for you to mind your own business, and keep away from the Saints of God, so that you may be able to cut short the days of your life in the Jahannam (Hell fire)!

Or make Tawbah and serve the Saints of Allah with whole heart and whole effort. And Insha Allah, next topic will on that as well. 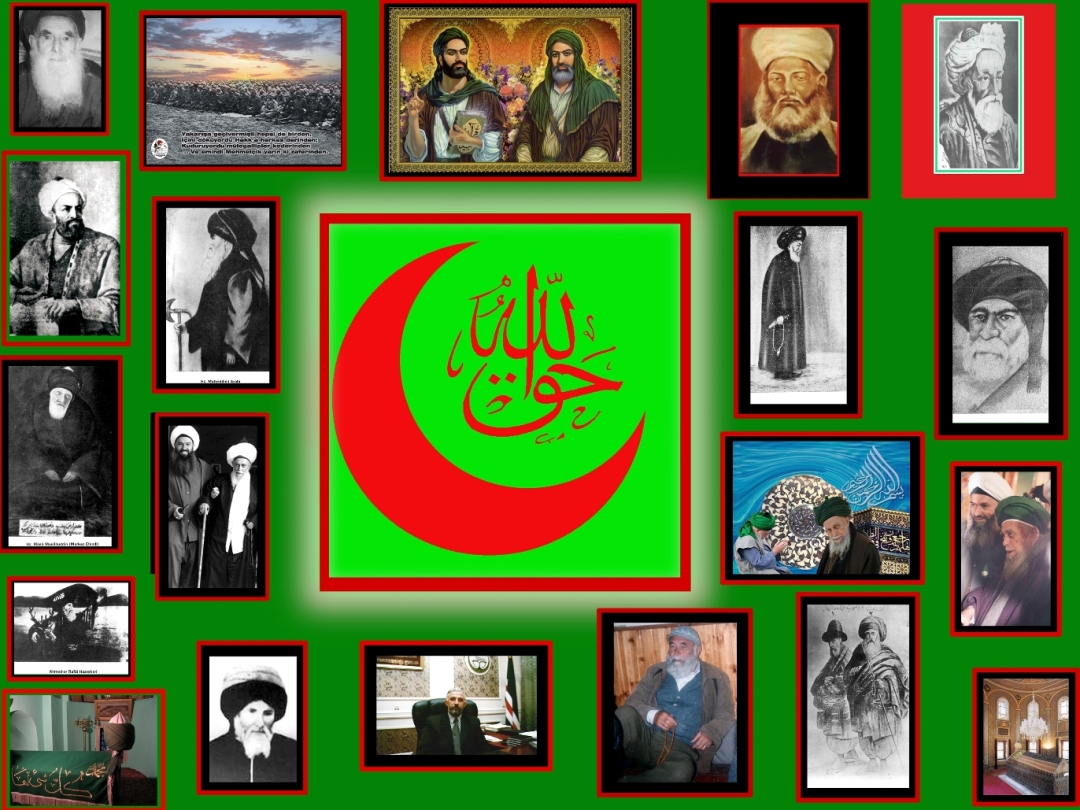