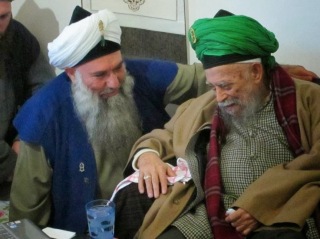 Assalamu alaikum wa Rahmathu Allahi wa Barakathu
“Initiation” (Baya’h) or Oath of Allegiance is a Sunnah of Prophet (Peace and blessings of Allah be up on him) and his companions and Salafs (May Allah Sanctify their Souls).
Only Sufism practice the  Sunnah of “Initiation” for learning Islamic Sciences  since the time of Prophet alaihiswalathu wa salam.
Quran commanding to all believers to follow those pious servants who are charged with authority. ‎4:59. Sura Nisa: O ye who believe! Obey Allah, and obey the Messenger, and those charged with authority among you.
The Hadith from Sahih Al Bukhari Clarifies what Quran says in the above verse:
Sahih al-Bukhar(English Translation)-9.377:Narrated `Abdullah bin Dinar: `Abdullah Bin `Umar wrote to`Abdul Malik bin Marwan, swearing allegiance to him: ‘I swear allegiance to you in that I will listen and obey what is in accordance with the Laws of Allah and the Tradition of His Apostle as much as I can.’
Another Hadith from Sahih Al Muslim:
From 40 Hadith Collections of Imam Nawawi(Radiyallahu Anhu):On the authority of Tamim Al-Dari that the Prophet, sallallahu ‘alayhi wasallam, said:
“Religion is nasihah.” We said: “To whom?” The Prophet, sallallahu ‘alayhi wasallam, said: “To Allah and His Book, and His messenger, and to the leaders of the Muslims and their common folk.”
[Muslim]
Advise from Prophet (alaihiswalathu wa salam) commanding Muslims to follow the Pious Servants of Allah (Awliya Allah):
The Messenger of Allah, sallallahu ‘alayhi wasallam, delivered an admonition that made our hearts fearful and our eyes tearful. We said, “O Messenger of Allah, it is as if this were a farewell sermon, so advise us.” He said, “I enjoin you to have Taqwa of Allah and that you listen and obey, even if a slave is made a ruler over you. He among you who lives long enough will see many differences. So for you is to observe my Sunnah and the Sunnah of the rightly-principled and rightly-guided successors, holding on to them with your molar teeth. Beware of newly-introduced matters, for every innovation (bid’ah) is an error.”
[Abu Dawud & Al-Tirmidhi, who says it is an authentic hadith)
Another Hadith Says Muslims to follow the righteous Imams and Scholars from Ahlul Bayth:
While holding the door of Holy Kaaba, Abu Dharr told that he had heard Prophet Muhammad (pbuh) say, “My family among you is like Noah’s ark. He who sails in it will be safe, but he who holds back from it will perish.”
Another Hadith
Prophet Muhammad – may Allah (SWT) bestow peace and benedictions upon him and his pure Progeny – said: “Verily, I am leaving behind two precious things (thaqalayn) among you: the Book of Allah and my kindred (itrah), my household Ahlul Bayt (Ahl al-Bayt), for indeed, the two will never separate until they come back to me by the Pond (of al Kawthar on the Day of Judgement).” [Hadith-e-Saqlain]
It is from the Hadiths and Quran Verses, we can understand that, Allah and His Messenger commanded us to follow the Saints(Awliya Allah) and the righteousImams of Ahlul Bayth and those who are given “Permission” (Ijazah) by the Imams and Saints of Ahlul Bayth.
Quran Clears all doubts
“Beware, verily on the friends of Allah, there is no fear, nor shall they grieve.”
(Surah Yunus, Verse 62)
Do not follow some sects who claim to be Sufis or Ahlu Sunna wal Jamah
A True Sufi Way Has:
Islamic Shari’a from the Madhab of one of the Four Imams (i.e. Shafi, Hanafi,Maliki,Hanbali)
Aqee’dha from one of the two Schools (i.e Mathureedhi and Ash’ari)
A “Sislila” (Chain) which connect your spiritual guide to Prophet (alaihiswalathu wa salam) through a group of successors  in an unbroken chain.
A “Shaykh” (Spiritual guide) who is given “Ijazah” (Permission) and is authorized by his Shaykh.
You may follow any Sufi Way, which meet the above criterion.
There are many Sufi Order and Shaykhs to today. The Major one is:
Naqshbandi Haqqani Sufi Order of Sulthanul Awliya Mawlana Shaykh Nazim Al Haqqani and His Deputy Shaykh Abdul Kerim Al Hakkani, named as “Osmanli Naksibendi Hakkani Tarikat” taking it’s lineage to the greatest saints in the past like: Khwajah Muhammad Baha’uddin Shah Naqshbandi Al Owaisi Al Bukhari,Gauz Al Azam Shaykh Muhyiddin Abdul Qadir Al Jilani and  Mawlana Rumi (May Allah Sanctify their Noble Secret).
Grandsheikh Maulana Muhammed Nazim al Kibrisi is the 40th Grandsheikh of the Most Distinguished
Osmanli Nakshibendi Hakkani Sufi Order. He is the Sultan of the Saints, the Qutub and the Ghauth of this era, the one who represents the Prophet Muhammed (p) for these times, the one who holds the secrets of these “end of times”, and of the Mahdi (as). He is a descendant of the Prophet (p), being both Hasani and Husayni from both his parents. He is also a descendant of Ghauth ul Azam Abdul Qadir Jilani from his father’s side and from Mevlana Jelaludin Rumi on his mother’s side, may Allah sanctify their secrets and raise their stations. He was born in Cyprus and constantly travels around the globe bringing the message of peace and light to the whole world.
Sheikh Abdul Kerim al Kibrisi is Maulana Sheikh Nazim’s worldwide representative (halifah). He is blessed not only with sacred lineage, being a descendant of the Holy Prophet’s family, but he is also blessed with royal lineage of the Ottoman sultans. He was also born in Cyprus and personally raised and trained by Sultanul Awliya Maulana Sheikh Nazim. He was sent to North America at a tender age to acquire invaluable life experiences and ultimately to spread the true teachings of Islam and Sufism in this country and around the world. 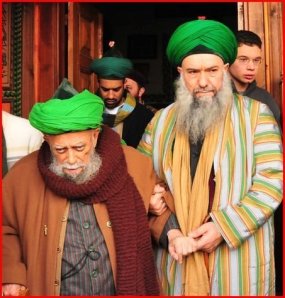 The Order takes it’s name ‘Osmanli Naksibendi Hakkani Tarikat’ from its present Shaykh’s lineage to Ottoman Sulthans. The Silsila is known as “Golden Chain”. The chain which connects to Imam Mahdi alaihissalam. However, the Shaykhs who are descendants of Ottoman Sulthans will be direct Intercessors of Imam Mahdi (alaihissalam), as they are the ones representing the Khilafat and handing over it to the Owner of the time-Imam Mahdi (alaihissalam).
If you would like to take Bayah (initiation) with the Shyakhs of this Order, then please contact through this blog